It does seem a bit boastful to say my tomatoes are actually bigger than yours. I don’t even know you. Your garden is probably spectacular. However, after a full season of playing around in my garden this year I can honestly say that the cherry tomatoes from my raised bed that used biochar were larger… and we had more of them… and they tasted great 🙂 It wasn’t a lucky happenstance. I made sure that both beds with cherry tomatoes had the same amount of water and they were in the same part of the yard. (See my earlier post for details.) The seeds were from the same store. You get the point. The only difference was the biochar mix and it was a positive result. 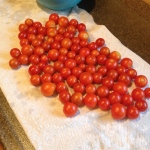 My results are not unique either. In a much more controlled environment by people certainly much smarter than me at the University of Missouri in 2013 studied the impact of biochar on tomatoes versus not using Biochar. The study was managed by the MU Bradford Research Center and they found the tomato harvest was literally more than twice the harvest of the crop not using biochar (9.29 lbs to 20.52 lbs). This was in separate 4×8 plots. Not too shabby for some carbon-lush pieces of char. More and more research is proving the same theory. Not all are showing 2x the bounty in a garden but they do all show significant improvement in soil conditions and crop production. Not to mention, the positive impact of carbon sequestration on the atmosphere.

It’s a win-win-win!
The garden wins because it looks amazing. The family wins because you get great vegetables for dinner. And, the world wins because it’s one more step to a long term solution for a stable, healthy environment. 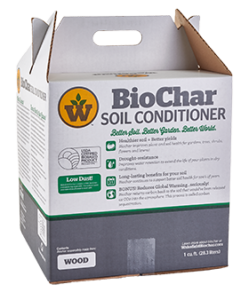